Before changing the Electronic Music game in South Africa as GoldFish, Dominic Peters and David Poole were mild-mannered students by day – that blew the roof off house parties by night. Their trail-blazing live show, which mixed tireless house beats with multiple live instrumental performances earned the attention of a swelling house and electronic music fan base. As their fame grew, so did their scope, scouring obscure sources for unique and cheeky samples that they twisted into endlessly fun hooks and choruses. Stirring African rhythms and Sax melodies into the mix helped Goldfish evolve a truly unique house sound. Their burnished grooves are rooted in pure pop pleasure, hooking even the most cautious listener onto the dance floor (without next-day regret). After seven years basing themselves between Cape Town and Ibiza, Dom and Dave have settled in San Diego to concentrate on the burgeoning US Market. A consistent string of chart-topping hits — and a live show that has seen countless festival appearances from Coachella to Glastonbury — has helped GoldFish become one of the most enduring and influential groups in live electronic music. 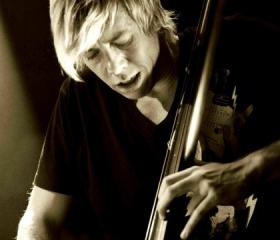 Dom’s music (and art) career began at age 6, colouring in the notes on the family piano because he could ‘hear the colours.’ Mum wasn’t quites as impressed, but enrolled him in Piano lessons none the less. His first actual electronic keyboard followed a few years later, and after a brief and regrettable “Roxette” phase, Dom discovered Jazz and never looked back, coupling a Bachelor’s degree in Jazz Performance from UCT and a busy session musician schedule on piano, keyboards and double bass.

The beginnings of the idea of an electronic project began when he began programming tracks to take to band practice, frustrated that he couldnt always verbalise what he was hearing inside his head to his band mates – and soon realized his passion for production.

Dave and Dom then hooked up on the concept of a live electronic duo on long trips to a regular Jazz gig. The name Goldfish came about when Dave joked about Dom’s legendary short term memory skills – able to remember vast amounts of irrelevant data, but clueless to where his car keys were. And thus began a match made in heaven. He is at his happiest surfing or making music. Daves musical journey began with a sadistic violin teacher at age 6. A bit later he was put in a room with wall-to-wall instruments and told pick one. It turned out to be a sax. Fast forward a few years and he did his first gig age 13 with his rock band (which eventually became Dorp). After school he went to study Jazz at UCT, this is where he met his long time studio partner Emagics Logic (Audio recording and sequencing software) .In the studio with Dorp he spent more time behind the desk than in front of it.

All along James Brown and Jamiroquai had been infiltrating their way into his music in-between all the jazz and rock. This combined with his prolific Jazz band Breakfast Included eventually led to him and Dom joining forces in this Electronic/live Duo. With goldfish Dom and Dave get to explore the dark depths of electronic music production more extensively to create genre bending music.